It is that time once again! The cars are on the track testing and the drivers are ready to go. All that is missing is the fun we have in our Fantasy league.

If you are new to NASCAR and/or fantasy leagues this one is for you. We are a no pressure group, just good fans looking to have fun and crown a winner at the end.

To join our league go to Yahoo sports and sign up. When it ask if you want to join an existing group type in Group ID# 3967 and the password is nascar

I look forward to you beating me up again as I usually come in last in our league. This year we are going to have a prize for the overall winner of $100 gift card from Fanatics.com!

I look forward to seeing you in our league!

Disclosure – We were given some M&M’s as compensation for writing about this contest. We would have shared this story with you anyway but the good people at M&M’s Racing sent us some nice sweets to enjoy. Here are the details of the contest and good luck.

M&M’S Racing Announces Its “When We Win, You Could Win” Sweepstakes

With the Sprint Cup Series now underway, fans are gearing up for another exciting season of NASCAR racing. M&M’S Racing is celebrating the season with the “When We Win, You Could Win” sweepstakes, which features instant-win prizes and the chance to win a 2012 Toyota Camry each time the #18 M&M’S car wins a race.

Once fans register and enter the sweepstakes at the “When We Win, You Could Win” site, they are automatically eligible for the Instant Win Game. Each time the #18 M&M’S car wins, a panel of judges will conduct a drawing, selecting one lucky grand prize winner. The prizing breakdown is as follows:

Submissions are open now through November 21st at http://mms.com/us/racing/wewinyouwin/. For complete rules and additional details, click on the official rules tab.

Just thought I would give an update on our fantasy league. I am amazed that I am not in last place already. How are you doing in the league! Let me know if you have any secrets to keep me from finishing last again. 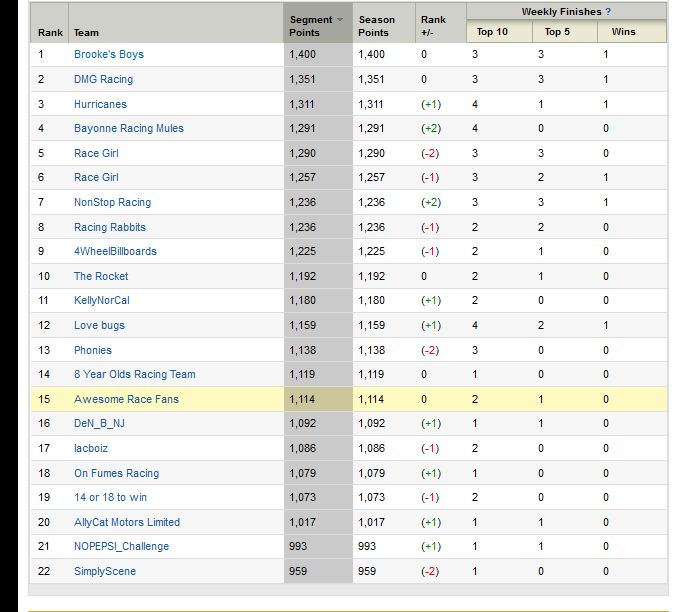 Remember this weekend we have the Camping World truck race on Saturday and Sprint Cup race on Sunday.

It is that time of year again. The cars are getting ready to take to the track so that means it is time to start up the NASCAR Fantasy league again. Once again it will be on Yahoo as that seems to be the easiest place to keep track.

Our League is free to join and just some good fun. You can join our NASCAR Fantasy League here. Our group ID is 8656 and the password is NASCAR I look forward to another great season. Our league is friendly and easy going.

This is going to be an interesting year with all the drivers changing teams and what seemed like a game of musical crew chiefs.

Disclosure – We were given some M&M’s as compensation for writing about this contest. We would have shared this story with you anyway but the good people at M&M’s Racing sent us some nice sweets to enjoy. Here are the details of the contest and good luck.

M&M’s Racing is Having a Cool Contest Where Fans Can Win a Toyota.

M&M’S® fans, start your engines! Mars, Chocolate North America announced today that it is revving up race day excitement among all consumers with the launch of the 5 Characters, 5 Cars…Pick the Car You Want! promotion. Consumers will purchase participating M&M’S® items from specially marked displays in stores and enter a UPC code online for their chance to win one of five Toyota models from the sweepstakes drawing.

Each car is aligned with a different fun-loving M&M’S® Character: Red with the Toyota Tundra, Yellow with the FJ Cruiser, Green with the Camry, Orange with the Prius and Blue with the 4Runner – as consumers enter the sweepstakes, they will choose which of the five cars they would like to be eligible to win. With each sweepstakes entry, consumers also have a chance to instantly win additional prizes including NASCAR® merchandise, gas cards and cash.

“As ‘The Official Chocolate of NASCAR,’ we take pride in connecting with race fans to Make Race Day More Fun, and this promotion allows our consumers to combine the things they love the most –M&M’S, driving and winning,” explained Debra A. Sandler, Chief Consumer Officer at Mars Chocolate North America. “We’re thrilled to launch this promotion with Toyota to further elevate our commitment to NASCAR and the most dedicated fans in sports.”

The promotion kicks-off on June 15 and consumers will be able to enter to win through the end of the year and will be supported through a dedicated 360 marketing approach including print, broadcast, online, social media and in-store programs allowing fans full visibility and opportunities to win.

M&M’S® and NASCAR® have long been a winning team and the 5 Characters, 5 Cars…Pick the Car You Want! promotion is just one of many new initiatives Mars is taking in 2011. Other firsts this year include the first-ever M&M’S NASCAR® television commercial featuring Red, Yellow and Kyle Busch; first-ever television advertising during NASCAR® races with an M&M’S® NASCAR® spot running throughout the season; the first-ever NASCAR® national FSI and the introduction of a new, dedicated tagline, “M&M’S® Makes Race Day More Fun,” which is being showcased throughout the season and connects consumers with the fun they experience both on and off the track..

For more information on the M&M’S® NASCAR® partnership, the 5 Characters, 5 Cars…Pick the Car You Want! promotion and for your chance to enter, please visit www.mms.com/us/racing or www.facebook.com/mmsracing.

Mars Chocolate North America is the North American chocolate operations of Mars, Incorporated. In 1911, Frank C. Mars made the first Mars candies in his Tacoma, Washington kitchen and established Mars’ first roots as a confectionery company.  In the 1920s, Forrest E. Mars, Sr. joined his father in business and together they launched the MILKY WAY® bar.  In 1932, Forrest, Sr. moved to the United Kingdom with a dream of  building a business based on the philosophy of a “mutuality of benefits” for all stakeholders – this vision serves as the foundation of the Mars, Incorporated we are today.  Based in McLean, Virginia, Mars has net sales of more than $30 billion and six business segments including Petcare, Chocolate, Wrigley, Food, Drinks and Symbioscience. More than 65,000 Associates worldwide are putting our Mars Principles in action every day to make a difference for people and the planet through our performance.