· Fans can enter now through Aug. 31, 2014 by visiting NASCAR.com/inmyride and sharing images of the items in their personal vehicles

· The Mobil 1™ #INMYRIDE Sweepstakes will live on the “NASCAR Automotive Technology Center Engineered by Mobil 1” page on NASCAR.com

CHARLOTTE, N.C. – Together with NASCAR Digital Media, ExxonMobil today is unveiling the Mobil 1™ #INMYRIDE Sweepstakes, an online fan engagement program that gives everyday motorists an opportunity to showcase what they keep inside their personal vehicles and enter for a chance to win an ultimate NASCAR® experience – a trip to Las Vegas for the 2014 NASCAR Sprint Cup Series Champion’s Week™.

Starting today, fans are encouraged to snap and share their #INMYRIDE photos to a special hub within the “NASCAR Automotive Technology Center Engineered by Mobil 1” website at NASCAR.com/INMYRIDE. In addition, the comprehensive platform features a central landing page where fans can upload their photos via Instagram with the hashtag #INMYRIDE to enter the sweepstakes.

“We’re asking fans to show us their personalities and what is important to them by visiting NASCAR.com/INMYRIDE and sharing their unique images,” said Artis M. Brown, Mobil 1 motorsports manager, ExxonMobil Fuels & Lubricants. “You can tell a lot about drivers just by looking inside their cars, whether it’s under the hood or in the cabin. We’ve found that many passionate Mobil 1 users take pride in the fact they’re putting the world’s leading synthetic motor oil brand in their engines.”

Photo submissions and entry into the Mobil 1 #INMYRIDE Sweepstakes conclude Sunday, Aug. 31, 2014 at 11:59 p.m. EST. One lucky fan will be randomly selected as the sweepstakes winner. The winner and a guest will receive a NASCAR Sprint Cup Series Champion’s Week-themed prize package that includes:

Round Trip Flights to Las Vegas, NV
3-Night Hotel Accommodations
Tickets to NASCAR Myers Brothers Luncheon™
VIP tickets to the NASCAR Victory Lap™
Tickets to NASCAR After The Lap™
VIP Brunch / Meet & Greet with NASCAR Personality
Tickets to the 2014 NASCAR Sprint Cup Series Awards™
Ground transportation and additional spending money awarded as a $500 Visa® Gift Card
While other sports have sticks and balls, NASCAR has the automobile and a fan base steeped in rich car culture. NASCAR fans are more likely than non-fans to be heavy users of their vehicles, which makes the Mobil 1 #INMYRIDE Sweepstakes a perfect avenue for Mobil 1 to build brand awareness and engage fans.

To support the campaign, Mobil 1 is launching an integrated marketing effort that includes online, radio, and video content starring Tony Stewart, driver of the No. 14 Mobil 1/Bass Pro Shops Chevrolet SS and co-owner of Stewart-Haas Racing (SHR). Joining Stewart to support the campaign is fellow SHR driver Kurt Busch. Each offers a humorous take on various items that reside in their personal vehicles, encouraging fans to do the same.

In January 2013, Mobil 1 announced a multi-year partnership extension making it the “Official Motor Oil of NASCAR” and “Official Lubricant Technology Partner of NASCAR” through 2017. As part of that renewal, Mobil 1and NASCAR launched a digital content platform with the “NASCAR Automotive Technology Center Engineered by Mobil 1” online site, NASCAR.com/AutomotiveTechnology, where fans can learn about the latest in automotive and racing technology.

Mobil 1 has been the Official Motor Oil of NASCAR since 2003 and is used by more than 50 percent of the teams in NASCAR’s top-three series. The 2014 NASCAR racing season marks the 12th consecutive season in which the Mobil 1 brand is an official partner of NASCAR, the premier motorsports series in the United States.

ExxonMobil reminds all Mobil 1 #INMYRIDE Sweepstakes participants to take and share images of the contents of their vehicles only when their vehicle is parked.

About Mobil 1 in Motorsports

The Mobil brand’s history in motorsports officially began in 1979 with a sponsorship of the Williams Formula One Racing Team. From that time, the presence of Mobil 1 technology on race tracks and circuits has grown by global proportions. Today, Mobil 1 synthetic motor oil is relied on for its ability to deliver exceptional engine performance and protection even under some of the most extreme conditions by team owners and many of the world’s leading automotive manufacturers.

Along with its status as the Official Lubricant Technology Partner of NASCAR, Mobil 1 enjoys a long association with many of the world’s most popular and successful race teams, including Stewart-Haas Racing in the NASCAR Sprint Cup Series™, McLaren Mercedes’ Formula One team, Corvette Racing’s TUDOR United SportsCar Championship team, Tony Stewart Racing in the World of Outlaws Sprint Car Series, as well as the Porsche Mobil 1 Supercup—the world’s fastest international one-make series.

The world’s leading synthetic motor oil brand, Mobil 1 features anti-wear technology that provides performance beyond our conventional motor oils. This technology allows Mobil 1 to meet or exceed the toughest standards of car builders and to provide exceptional protection against engine wear, under normal or even some of the most extreme conditions. Mobil 1 flows quickly in extreme temperatures to protect critical engine parts and is designed to maximize engine performance and Keeps Your Engine Running Like New.

We have had a few movers and shakers in the last few weeks in our NASCAR fantasy league. We have a new leader as moreCoKAHNEthanJuanPablo moved ahead of Mona racing for the top spot. Our biggest movers of the week were go20 and River Raisin Racing were both up 5 spots. The big news is that I am no longer in last place! Actually it is probably a computer glich. I am still looking for a sponsor for our final prize. If you are a company and want to sponsor a prize in our league contact me at vinny@awesomeracefans.com 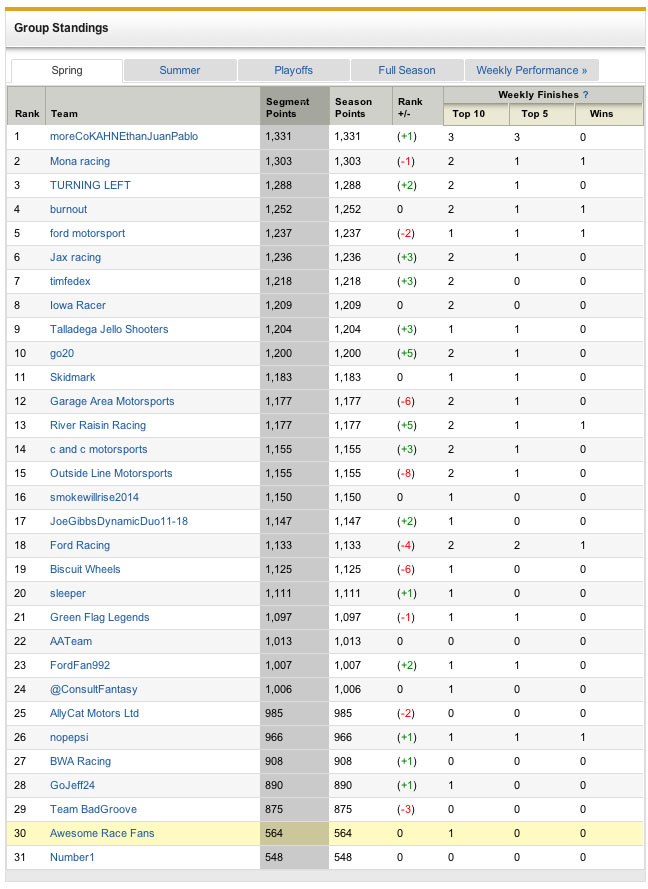 It is that time again to announce our NASCAR fantasy league. Last year the big winner was Alan Lehenbauer who took home a $100 gift card from Fanatics.com. He said he will be back to defend his Championship. I am still working out the details for this years prize but I am sure it will b something similar. To join go to Yahoo http://racing.fantasysports.yahoo.com/auto and when prompted to join a league put in Group ID  4160 and the password is orangecone. 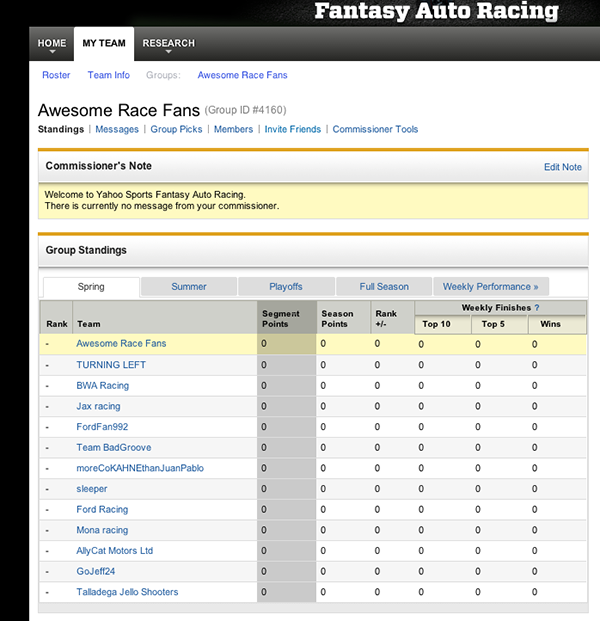 We are a fun league and I think this is our fourth year doing it. Come join us even if you are not familiar with how fantasy leagues work. It isn’t that hard! You pick 4 drivers a week  and you can even let the same drivers go week after week for a while if you don’t have the time.

Looking forward to another great season!

Wanted to throw a quick update for those that are playing in our NASCAR fantasy league. Things are getting tighter at the top and less than 150 points separate the top 5 in the standings. 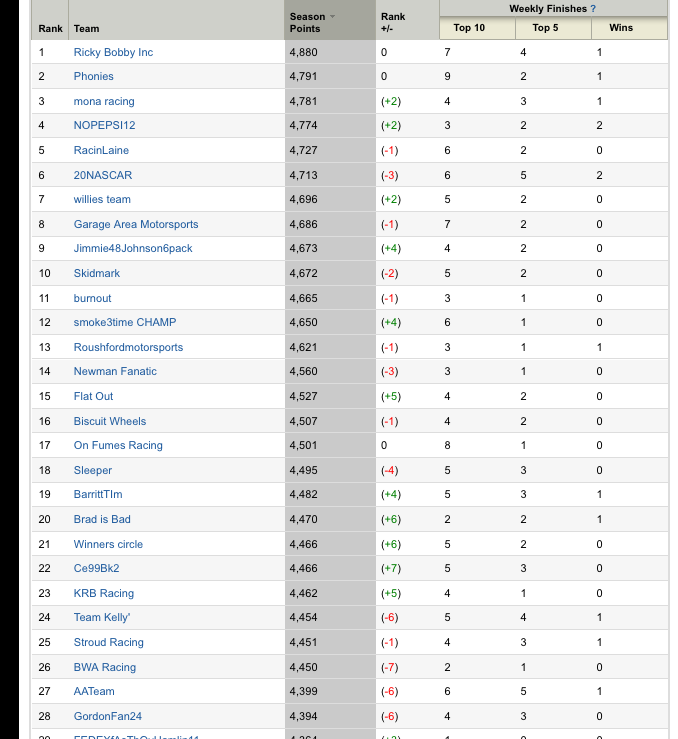 After a few weeks in we have a close battle for the lead in our NASCAR fantasy league. RacinLaine is holding a few point lead over Skidmark who is just ahead of NOPEPSI12. While it is still very early in the year the top 10 are only seperated by less than 70 points. Some notable teams this week were Brad is Bad  and Flat out who jumped up 12 spots.  Garage Area Motorsports up 16 but the biggest mover was AA Team up 19 spots in one week. Congrats to all! 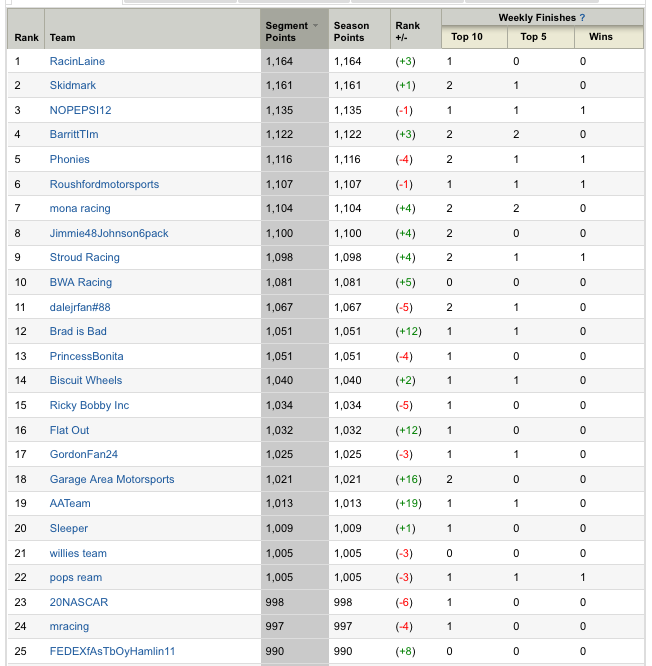