Texas Motor Speedway is utilizing “Throwback Thursday” to showcase the career of retiring NASCAR icon Jeff Gordon at the venerable motorsports venue with the release of a photo gallery in anticipation of his final TMS start coming in next Sunday’s AAA Texas 500 Sprint Cup Series race.

Texas Motor Speedway is featuring 24 photos – in honor of his number – of his career at Texas Motor Speedway that stretches back to the first race at the facility in 1997 and beyond. Every race year from 1997 to 2015 is represented among the two dozen images that range from Gordon taking part in the speedway ground-breaking ceremony in 1995 to his lone TMS victory in 2009. Here is a small sample.

NASCAR catches up with Michael Annett and discusses the details of the fire in his hauler during transporting this weekends race cars to Texas.

This weekend all of the NASCAR series heads to the Texas Motor Speedway for some racing. With Jeff Gordon already punching his ticket to the final at Homestead it will be interesting who else will get their win and be in. Just a hunch I have but I have a feeling that none of the Chase eligible drivers will be winning this week. Kevin Harvick has been strong at the track as of late and can win but I just have a feeling it will be someone outside the chase.

Erik Jones In For Matt Kenseth 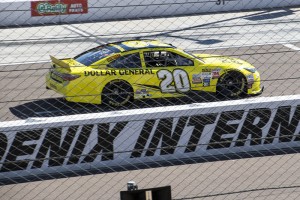 Nascar has held up its suspension of Matt Kenseth for 2 races. Joe Gibbs racing is putting Erik Jones in the car to the surprise of no one. I am surprised they just didn’t park Matt for Homestead also. No reason for NASCAR to have media focused on him during the grand finale. I am not saying parking him for 3 races is the right call just surprised that Matt will be racing again this year.

Five of the eight Chase drivers have won at Texas, led by Carl Edwards, who has taken three checkered flags there. Kurt Busch, Kyle Busch, Jeff Gordon and Logano have each won at Texas once, while Kevin Harvick, Martin Truex Jr. and Brad Keselowski have never been to Victory Lane there.

Hello fans.  This week the cup cars are racing at Texas Motor Speedway.   I dont know a whole lot about the Texas track, so I did some research about the track to see what I could find out.

On November 28,  1994, Bruton Smith announced his plan to build a multi-million dollar speedway in the Dallas-Fort Worth area.  In February of 1995,  they selected an area  for the project in the Fort Worth-Denton county area.   The location, at the intersection of Interstate 35 West and Texas State Highway 114 was also chosen for its ease of accessibility for fans.   On April 11, 1995 ground was broken for the beginning of construction with Jeff Gordon, Terry Labonte, and Bobby Labonte on hand to help.   In July of 1996, they broke ground on the condominiums outside turn 2.   Construction was completed and on April 5, 1997 Mark Martin won the inagural Busch series race driving the #60 Winn-Dixie Ford to victory lane.   One day later, Jeff Burton won the inagural Nascar cup race driving the #99 Exide Batteries Ford to victory lane in front of a sellout crowd of more than 200,000 fans.   In 1998 they modified a portion of the track near turn 4 to facilitate ease of transition of the banking from the corners to the straightaways.

Texas Motor Speedway is a 1.5 mile oval track.   The track itself is 58 feet wide at its minimum and 750 foot radius in the turns.   The front stretch is 2250 feet long and the back stretch is 1330 feet long.   The track has 24 degrees banking in the turns and 5 degree banking on the straightaways.    The infield can hold approximately 53,000.   There are over 159,000 permenant seats,  143,755 available grandstand seats, and  an estimated total capacity of over 212,000.   Texas Motor Speedway is set on 1500 acres and has several structures on site including a broadcast center, a media center, a cafeteria, a goodyear building and  the victory theatre.

Here are some random fun facts about Texas Motor Speedway.   Sparky is the official mascot of the speedway.   Both Jeff Gordon and Mark Martin hold the track record for most top 5 finishes.   Texas Motor Speedway has enough permenant lighting to illuminate 11 football fields.   During the original construction, the workers moved a record 4 million cubic yards of dirt!    In one year enough hot dogs are sold to line the 1.5 mile oval 6 times or 9 miles.  Enough beverages are consumed in one year to fill the 34,000 gallon pool at the Lone Star Tower Clubhouse.  Texas Motor Speedway is the first speedway to display the laps in the race counting both up and down, showing how many laps are left and how many laps have been run.

The race is this Sunday at Texas Motor Speedway at 3pm eastern time. On a side note- it was announced yesterday that Kodak will be ending their 22 year relationship with Nascar.   In that time, cars bearing the Kodak sponsorship have won the Daytona 500 four times.  A spokesman said that as they transform their company and go in a new direction, they have chosen to pursue other avenues of advertising in accordance with their new direction.

Well here’s hoping that qualifying goes as planned this weekend.  As you may know, qualifying has been rained out the past three weeks in a row forcing a starting line up by owner points.   Here’s to good weather in Texas for the race and for qualifying!  Well here’s to a great rest of the week.  I’ll be back on Sunday to post my post-race blog again.  Hope you enjoyed the information on Texas Motor Speedway this week.  Next week its Phoenix, that should be interesting.   Until then race fans.