The truck race at Pocono had a little payback as Tyler Reddick and German Quiroga mixed it up a few times resulting in Reddick being parked. 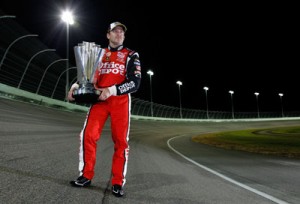 Three Time Sprint Cup Champion Tony Stewart was injured in a race last night in Iowa. The race was taking place at Southern Iowa Speedway in Oskaloosa, Iowa and Tony Stewart had the lead when he was involved in a 3 car wreck. Tony suffered a broken right tibia and fibula and according to the spokesperson at Stewart-Haas racing had surgery to fix the wounds at a local hospital.

The next update will be in the afternoon. Tony was alert and talking to the first responders before being placed on a stretcher.

Tony was suppose to do a test in Atlanta today but that has been cancelled. There has been no announcement on who will drive the #14 car at Watkins Glen this weekend.

For more information see these articles:

Here is the video from the first wreck at Talladega. It happened on lap 43 and Kyle Busch took the blame as he bumped Kasey Kahne who spun out and collected a lot of good cars in the process. There was a total of 16 cars involved in the crash.  Tony Stewart, Greg Biffle, Marcos Ambrose, Kevin Harvick, Kurt Busch and Brian Vickers were involved. Brian Vickers was in the #11 driving for an injured Denny Hamlin.

The ending to the race on Sunday at Talladega was scary as there was a 25 car wreck. No one was seriously hurt as the field crashed behind eventual winner Matt Kenseth.

Jeff Gordon and Kyle Busch also escaped the “Big one” as they were just ahead of the wreck also. The last lap crash was started by Tony Stewart who tried to block the oncoming Michael Waltrip. After the race Tony Stewart said ‘‘I just screwed up. I turned down and cut across Michael and crashed the whole field,’’

To tell you the truth NASCAR has to be happy with the way the cars performed during the wreck because no one was hurt even though the wreck was scary.

Normally I wouldn’t be putting a crash video on the site but since Mark was ok and walked away I wanted to share this with you.