Welcome to AwesomeRaceFans.com My name is Vinny and I am the host for the site. I have followed NASCAR  for a while but only became a real fan around 1997 or so. I grew up an AJ Foyt fan and couldn’t wait until the Indy 500 was on. Now my passion is NASCAR. Below is a picture of me in Jeff Gordon’s car when I went to the race in Las Vegas in March 2008. 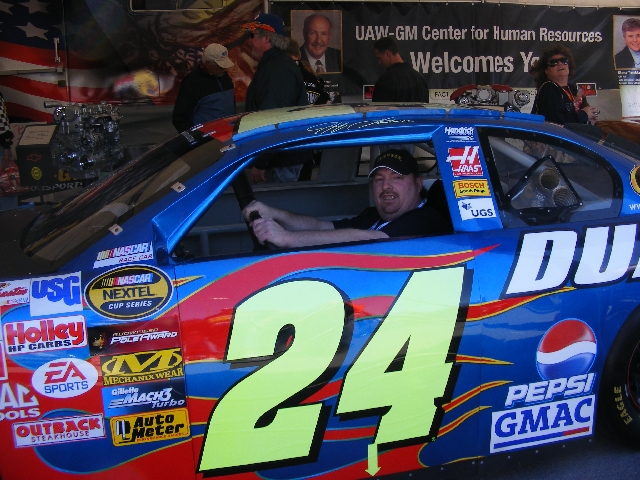 This site is not about me though, it is about what I consider the greatest sport “auto racing” and especially NASCAR racing.

The name is actually a combination from my favorite The Dollyrots songs “Because I’m Awesome”.  Since it is almost impossible to get a good auto racing domain I created a name that is easy to remember. I also want the site to be focused on the fans, about the fans etc.

Technically I am not suppose to root for a driver but I root for Jimmie Johnson and Reed Sorenson and I always want Dale Earnhardt Jr to do well also. Now I want you to enjoy the site, enjoy the pictures. Share your pictures so other NASCAR fans can enjoy them. 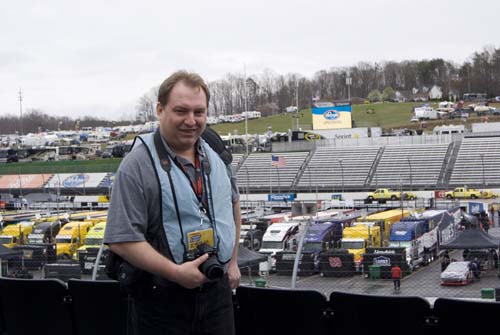 Many of the photos on the site are taken by Deborah, who is also a big NASCAR fan.

I’m a NASCAR fan from “the good ol’ days” that got sidetracked by life and a few years ago rediscovered the fun of races. “Back in the day” I took my son (who happened to be in a wheelchair, my two sons had a form of Muscular Dystrophy) to an Upstate New York short track, I’m thinking it was even a dirt track, near Sodus, NY. There was a raffle drawing between races and he won a bicycle. 🙂 It was fun, of course he couldn’t use it, but the look on the face of the man that handed that bike over the wall to my son was priceless. We gave that bike to a cousin, so it went to good use.

My dad was a truck driver that loved watching races, and even though not many were televised when I was young, I heard all about them.

My first “in person” NASCAR race was at Las Vegas Speedway in 2008. My grandson went to the Saturday Nationwide race with my daughter and had a ball. I went to the Cup race on Sunday and that was the end of that! Or beginning I should say. The photos will be posted on this site soon, along with other photos along the way.

Hope you enjoy my photos, my writing, and my NASCAR ramblings…

Contact Info:
If you feel the need to contact us, Use our form here or come find us on Twitter at @Awesomeracefans
Media can reach us at media(at)awesomeracefans.com